Why people opposed football in the past

If you’ve ever witnessed or been to a football match, you’ll be familiar with the great atmosphere to be found at a game. Hundreds of fans singing their team’s chant in unison, whilst trying to drown out the opposition. It’s part of the fun of the sport and certainly adds to the overall experience of a football game. It is one of the reasons that many people stick with their chosen football team for life. The community spirit that goes along with it makes for an incredible experience. 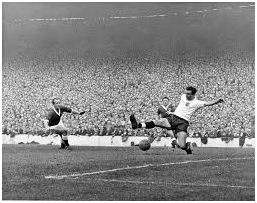 Whilst there is tight security at most games nowadays to prevent any serious issues from occurring, we should actually count ourselves lucky we’re allowed to spectate the game at all. In fact, it was almost banned over 30 times in the UK alone. Read on to find out how the sport narrowly avoided several permanent bans around the world.

One of the earliest attempts at banning the sport can be traced back to 1314, when the Lord Mayor of London issued a proclamation banning football from being played within the city, owing to the chaos it caused. Early football was often referred to as ‘mob football‘. It had few rules and did often result in injury or damage to local properties when played. If the residents of the city chose to ignore this new rule, they actually faced imprisonment.

Football was seen as a distraction from the mandatory discipline of archery, and as a result, Edward III and Edward IV both banned the sport, in the hopes that those playing it would practice their archery and become valuable assets in the defense of the nation.

Of course, these monarchs weren’t to know that football would evolve and become a multi-billion pound industry. Nowadays, it is the source of thousands of jobs, for football players, coaches, referees as well as for industries that are related to football including clothing and equipment suppliers who offer all kinds of kit including Nike Football Kits that you can source from https://www.kitking.co.uk/brand/nike

Bans outside of England

Bans on football weren’t just in England. In Scotland, James I passed the Football Act of 1424, banning the game. Similarly, there was a banning of a very similar sport to mob football called ‘La soule’, in France in 1369.

Nowadays, the game still faces minor obstacles. For example, all across the UK signs can be found prohibiting ball games in parks and residential areas. However, given it is now the most widely watched and played the sport in the world, it’s definitely come a long way since the attempted bans of the past 500 years.

Lewis Hamilton MBE is a four-time Formula One World Champion and considered by many to be the best driver of his generation; in fact,...